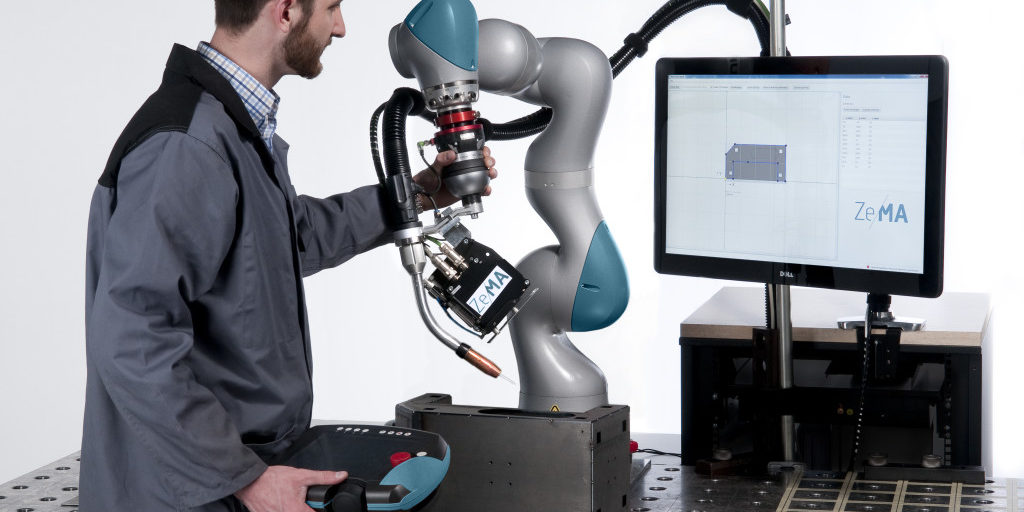 Special mechanical engineering is subject to technical and economic risks. Many variants and small batch sizes are a challenge, especially in joining technology. As a result, many production processes are carried out manually, especially in smaller companies, since a higher degree of automation is often not economical. Increasing pressure on prices means that manual processes at high-wage locations can no longer be implemented economically and competitively.

The partial automation of welding workstations offers great potential for increasing efficiency and process capability as well as reducing production costs. Human-robot cooperation (MRK) is an approach to demand-oriented, adapted and, if necessary, temporary automation. The central element of a semi-automated robot welding station is the development of a new user interface that enables intuitive adaptation of a robot system in the overall production process.

The production system developed at ZeMA enables the robot cell to be set up quickly and easily to meet the challenges of assembling customer-specific product solutions. The newly developed measuring concept allows the robot system to be quickly put back into operation after a rebuild, which reduces the downtime of the assembly cell and increases the productivity of the system. Combined with an intuitive operating concept that allows easy operation of the robot with little or no robot knowledge. With the TRSE interface for intuitive operation of the robot system, there are simple and innovative possibilities in automation. This allows processes to be designed flexibly and economically to ensure that high-wage countries remain competitive in the future. The safety concept offers new approaches to workplace design during commissioning and setup of the assembly cell. This enables a capability-based division of labour, which in the project leads to an increase in efficiency and process capability as well as to a reduction in production costs.