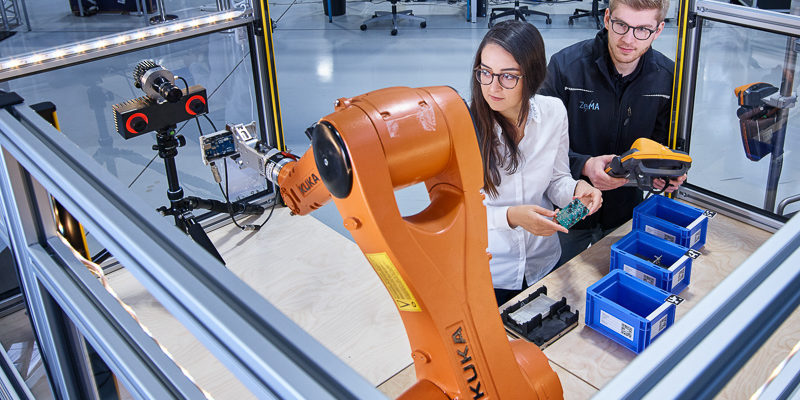 In the demonstrator, the safe cooperation between humans and industrial robots is addressed. The developments focus on safe workplace and process design without the use of protective fences and cages.

Advantages of the solution

This solution consists in the development of a sensor system that monitors workplaces and demonstrates the synchronized Human-Robot cooperation. It creates a safe environment for interaction and cooperation with humans without conventional separating barriers. As a use case, a system for the recognition and training of objects for a pick and place application is developed.

In this demonstration, different technologies are used for both the safety of the equipment and people and for the actual pick and place application.

For safety, several laser scanners and light curtains are used to detect the presence of people or objects and stop the robot before a collision occurs. Led strips are used to visualize the current situation.

For the application a 3D camera system is used to detect objects at the workplace. A trained model recognizes whether the objects are fully assembled, because only then the robot decides to pick them up and place them in the container for the finished assembly.

Such technologies can be used in products remanufacturing or repair scenarios where one station is used for disassembly and the other for assembly, and in applications that require picking and placement, such as bin-picking.